We live next to old man who lives by himself with his dogs and will talk your ear off any chance he gets. It makes a trip to the mailbox an hour an hour journey. But he has always been nice enough and the only neighbor who has made any effort to be friendly with us, so we try to chat with him, especially my husband. The Old Man (unfortunately, we’ve never caught his name, and this point we are too embarrassed to ask) tries to garden. His heart is just not in it. He gardens because he has a yard, and feels a yard should have plants. He’s got bushes and ornamental trees lined up on his lawn like you would find in a nursery. He tries, but you often hear him cursing the gardening gods while raking or digging another hole. Anyway, some of his trees are beautiful pink oleanders, and after some Internet research told me they were easy to root from cuttings, I went over there and asked the Old Man him for some. He generously allowed me to take whatever cuttings I wanted. I was looking for a time where I could get out early in the morning to take them and I was planning on today. My husband comes into the house asking “Were did the oleander come from?”
“I don’t know. I didn’t cut any yet, did he cut some for me?”
“No, come see this . . ,” 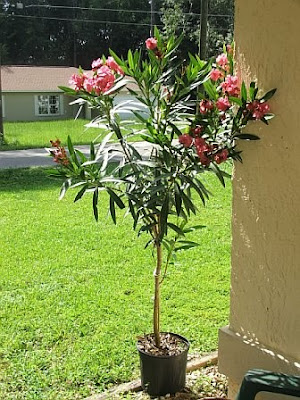 It was a whole tree!! The Old Man said he didn’t plant this one initially because it had caterpillars. He nursed it back to health (a.k.a., doused it in pesticides) but decided he liked the three trees in his yard and didn’t feel he needed another one. I believe his exact words were “I’m not planting any more damn trees! I’m done! Hope you like it.” I don’t know what I’ll do with it yet, but I’m so excited and touched at how nice he was. My hon said it was a not so subtle hint to not cut his trees. I think he’ll be getting a pot of sweet potato vine, whether he wants it or not!

Posted by Wicked Gardener at 11:09 AM