Yes! We have no bananas. 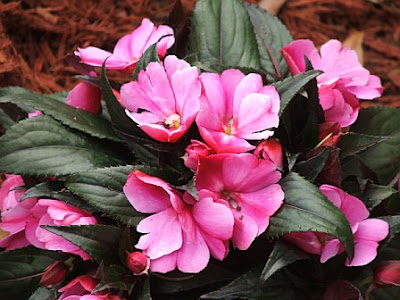 Aren't these New Guinea impatiens yummy? I went to the nursery with a totally different objective in mind, but I couldn't reisist these. They are bit of an exeperiment as I've never planted them before. I'm hoping they will last a bit longer than regular impatiens, which tend to got dormant during the heat of summer. 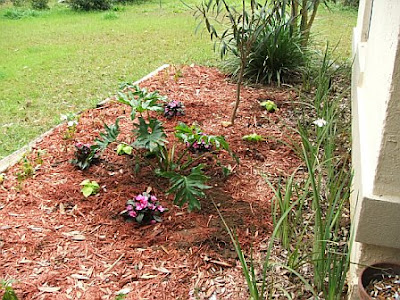 I added them to the front garden, along with a Philodendron 'Hope' and lime green coleus. The coleus and impatiens were intended for my mother's yard, (more on that in a later post) but the plants created rave reviews from the monster and his son, boys who don't typically care much about plants. So we had to keep them. I'll get some more for Mom tomorrow.

Now for the more depressing part of the day: 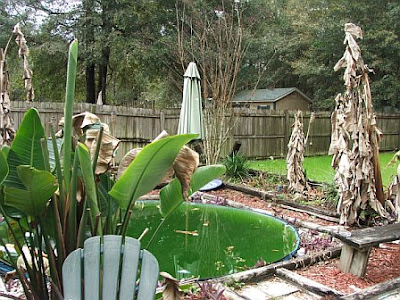 Time to get rid of the banana trees. They just look like crap late in the season, and as you can see the white bird of paradise plant has the same effect and stays much nicer. 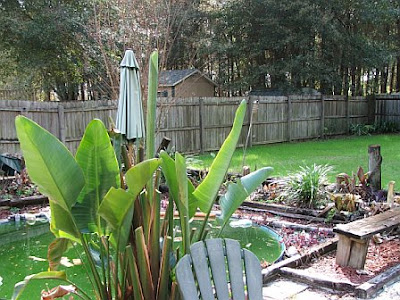 I am only realizing now, looking at the pictures, how much better this all looks. The dead plants were bothering much more than I realized. Unfortunely, the trunks of these plants were far more difficult to move and they are still there. I tried with all the Freddie Krueger malice I could muster, but no luck. In some parts it is just solid trunk, no room to even dig around. If anyone has any suggestions for removing banana trunks, it would be helpful. Well, if I'm this happy that the bananas are gone, imagine how I'll feel when we fix the pool!

Posted by Wicked Gardener at 5:26 PM