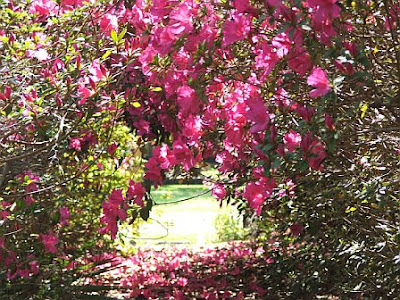 Let’s just meditate on azalea season for a moment.
The above picture is from my mom's yard, where I've been spending my last few weekends. I'm working on a new bed for my parent's. Primarily I've been doing it because it is fun to start with a blank slate, and secondly because I am a touch masochistic. So far it has been fun.
Here is the before, from 1/12/08: 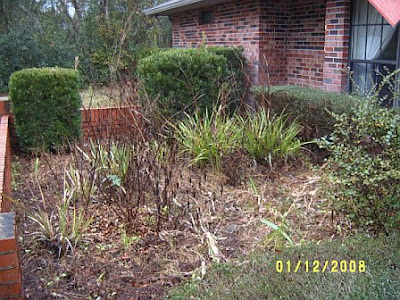 Now, for the record, I've only been doing this for the last two weekends, not since January 12th. So don't be too disappointed in my progress. The above bed in the front of their house had some sad looking roses, two thick clumps of irises, several mystery plants (one I think is society garlic, and the other looks like a amaryllis or crinum - either would be okay) and lots of weeds. 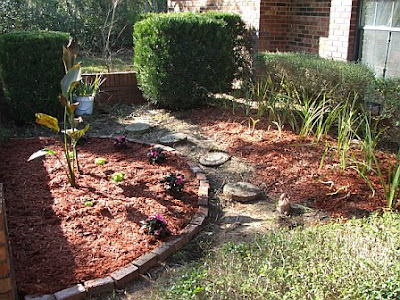 I removed the weeds and roses and made a circular bed on the left with some brick they had left over when they installed their pool. The round stepping stones were buried in the weeds. I put in a bird of paradise, which suffered some cold damage, impatiens and coleus. On the right, I divided the two large clumps of irises and up them against the bushes, along with some of the mystery bulbs that were all over the bed. In the upcoming weeks I'll add an angel trumpet between the two bushes, add variegated shell ginger behind the bird of paradise, mulch the stepping stone path and fix the brick border. So far it is a new garden and bit raw, but with any luck it get thicker and lusher as the season progresses.

Posted by Wicked Gardener at 7:23 PM